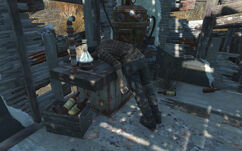 Moonshiner before being blown up 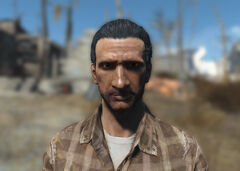 The moonshiner is a deceased man in the Commonwealth in 2287. He can be found in a small shack between Gunners plaza, Milton General Hospital and Hyde Park.

He appears after the Sole Survivor sees a big explosion. When heading towards the source of the explosion, one comes across a blown up shack, with the dead moonshiner blown to bits inside. The explosion will trigger when the Sole Survivor is close, making it an obvious point of interest.

Due to the presence of a chemistry station and numerous bottles, it can be assumed that he was attempting to create moonshine but failed, resulting in an explosion and his death.

The moonshiner appears only in Fallout 4.

Explosion of the cabin
Add an image to this gallery
Retrieved from "https://fallout.fandom.com/wiki/Moonshiner_(Fallout_4)?oldid=3292910"
Community content is available under CC-BY-SA unless otherwise noted.