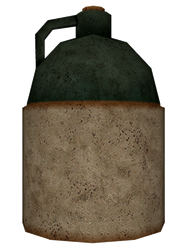 Moonshine is a consumable in the Fallout 3 add-on Point Lookout.

A potent potable that raises Charisma and Strength by 2 points each while reducing Intelligence by 2. In addition, it has a 10% chance to cause alcohol addiction.

As shown in the quest A Spoonful of Whiskey, moonshine is made from a potent mix of fission batteries, yeast, and wild or refined punga fruits. The Lone Wanderer can make six moonshine every 24 hours by taking the ingredients to Marguerite.

Moonshine is a common term for home-distilled alcohol, especially in places where this practice is illegal. The name stems from the American Prohibition era, where homemade stills were often operated under the light of the moon.

Retrieved from "https://fallout.fandom.com/wiki/Moonshine_(Point_Lookout)?oldid=2690607"
Community content is available under CC-BY-SA unless otherwise noted.