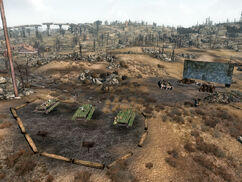 Moonbeam outdoor cinema is a location in the Capital Wasteland in 2277. It is located between Fordham Flash Memorial Field to the southwest, Hamilton's hideaway to the northwest and Big Town to the southeast.

According to Evan King, this is one of the three possible locations where members of the Family have been spotted.

Located directly northwest of Big Town, the Moonbeam cinema is a broken-down outdoor theater with a few cars and picnic tables. It seems to be a small base for super mutants, who are staging attacks on nearby Big Town.

After The Waters of Life, there is a chance of a vertibird dropping off Enclave soldiers to the east of here.

Skeleton found just north
Add a photo to this gallery
Retrieved from "https://fallout.fandom.com/wiki/Moonbeam_Outdoor_Cinema?oldid=3355813"
Community content is available under CC-BY-SA unless otherwise noted.