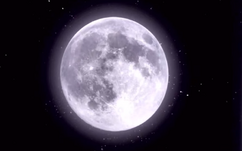 The Moon is the only natural satellite of Earth.

In 2020, the Delta IX series of rockets were commissioned by the United States Space Administration, which underwent missions to the Moon, one of which was the 17-day Zeus 12. In 2052, the final manned mission to the Moon occurred, and during this, the flag left by the Valiant 12 was recovered and brought back to Earth, where it was put on display in Washington, D.C.'s Museum of Technology.

At an unknown point in history, a significant historical event occurred in the Mare Tranquillitatis (Sea of Tranquility) lunar mare, where the United States Armed forces were involved.[1]

The Boulder Dome experimented with constructing settlements on the Moon.

While the moon appears in the skies of every game in the Fallout series, significant mentions of the Moon appear in Fallout 3, Fallout: New Vegas, Fallout 4, and Van Buren.

A mural in the Museum of Freedom in "Fallout 4", depicting an astronaut in the Mare Tranquilitatis lunar mare.
Add an image to this gallery

Retrieved from "https://fallout.fandom.com/wiki/Moon?oldid=3048941"
Community content is available under CC-BY-SA unless otherwise noted.