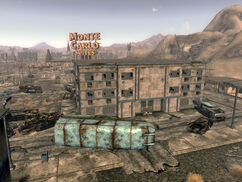 “The Scorpions hang out at the Monte Carlo when they aren't slinging chems or getting their heads blown off by the Fiends.”— Klamath Bob

The Monte Carlo Suites is a location in the Mojave Wasteland in 2281. It is situated on the western side of New Vegas, directly north of Sunset Sarsaparilla headquarters and south of Westside. It serves as the base of the Scorpions.

The Monte Carlo Suites is a large building with a big neon sign on the roof to the western side. Some info can be provided regarding the location and its current inhabitants by Klamath Bob, if asked about it in his liquor store in Westside.

The building is decayed, with two blue wrecked trucks outside the entrance. The inside is more or less well preserved, excluding the demolished stairs that deny access to the second floor. A Scorpions gang member usually guards the front door and will attack the Courier on sight. More members can be found inside, two of which wander within the rectangular corridor and adjoining rooms, while another four stay in an Easy locked room. The gang leaders Roller and Yvette are located here as well and will be likewise hostile to the Courier.

The Scorpions gang members (including Roller and Yvette) wear light mercenary outfits. Some of them carry small guns, others have switchblades and will attack at close range. A close observation suggests that they are more "sophisticated" than a typical gang, having arranged sleeping quarters, dining rooms, children's rooms, a workspace and a constant guard outside.

The rooms contain several refrigerators containing food, ovens and various crates, including one Average locked ammunition box. A workbench and a reloading bench can be found in the third room, to the right from the entrance. There is a Sierra Madre poster in one of the rooms.

The hallway, with Scorpions' graffiti

The gang's living room
Add a photo to this gallery
Retrieved from "https://fallout.fandom.com/wiki/Monte_Carlo_Suites?oldid=3337647"
Community content is available under CC-BY-SA unless otherwise noted.