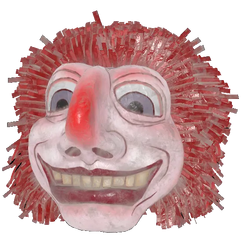 The monster mask is a piece of headwear in Fallout 76.

The monster mask resembles a large, pale, grinning humanoid face with a massive red-tinted nose. The head has red hair made up of small, rectangular strips of material. Small holes allow for Halloween candy to gradually fall from the mask.[1]

Temporarily used at the Monster Mash event at Watoga High School. When a resident is killed while wearing it, the mask is dropped on the ground. It is removed from the player inventory at the end of the event.

In 2103, one of the protectron marchers may wear a light blue monster mask during the Fasnacht Day parade, although the item is unobtainable by player characters.

The mask's model is named "Faschnacht_Masks_06_Waggis_GO", connecting the mask's appearance to that of the Waggis, an exaggerated parade character that traditionally throws candy and confetti at onlookers during the real-world Carnival of Basel, or Basler Fasnacht.

Retrieved from "https://fallout.fandom.com/wiki/Monster_mask?oldid=3231340"
Community content is available under CC-BY-SA unless otherwise noted.