Monster Under the Bed

Monster Under the Bed

“One of the Vault youngsters was playing outside when a terrifying monster stole their teddy bear. Now they refuse to sleep, claiming the monster comes back every night to hide under their bed! We've got to track the beast down to end the kid's fears - permanently.”— In-game description

Monster Under the Bed is a single-stage overseer quest in Fallout Shelter.

One of the children of the vault has had their teddy bear stolen by a "monster" while playing outside. The child now refuses to sleep without their teddy, and claims the monster hides under their bed. The player's dwellers can be sent out to track down and kill the beast. 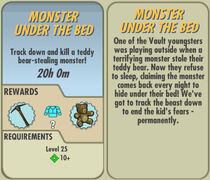