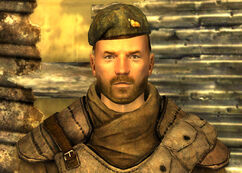 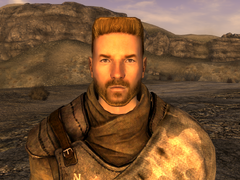 Monroe without his beret

“Where do you think you're going? I can't let you go into the ruins, not without a reason.”

Lieutenant Monroe is a member of the NCR Army who lives in the Mojave Wasteland in 2281.

Lieutenant Monroe is the superior officer of Private Gilbert and Private Ackerman. He is the officer-in-charge of the hostage rescue operation in the Boulder City Showdown quest.

Boulder City Showdown: Monroe informs the Courier that some Great Khans have holed up in the city and taken two privates captive.

Retrieved from "https://fallout.fandom.com/wiki/Monroe?oldid=3178487"
Community content is available under CC-BY-SA unless otherwise noted.