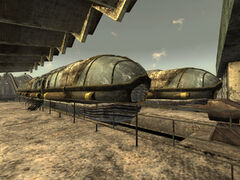 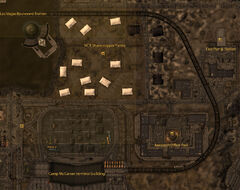 Monorail route, circling around Aerotech Office Park and NCR sharecropper farms
“The tram is about to depart. Please keep clear of the doors, and restrain any young children.”
“Travelers say there are two ways to get into the New Vegas Strip: through Freeside or via the monorail to Camp McCarran. Only military personnel and NCR VIPs are allowed to use the monorail.”— Loading screen

The monorail is a vehicle in Fallout: New Vegas.

The monorail is a mode of transportation used by the New California Republic in a variety of ways, including bolstering their presence on the Strip, sending troopers via the rail line in shifts.[1] The train allows the NCR to occupy two positions at a time, and serves as a supply line that's immune to raiders and other hindrances on the ground.[1] The transport is used primarily for supplies and deployment, but when NCR soldiers are granted leave, they use the monorail to visit the Strip.[2] Changing of the guard takes place at 9:00 and 18:00.[3]

The monorail can be utilized by the player character to traverse to and from the Strip's Las Vegas Boulevard Station and Camp McCarran. Traveling on the monorail does not take in-game time and is not seen. To be allowed to enter the monorail, the player character must have a "Liked" reputation with the New California Republic or must wear NCR faction armor. It's also possible to enter with Craig Boone as a companion.

When on the quest I Put a Spell on You, where the Courier plants or disarms a bomb inside the monorail, the train car can be entered. It is not possible to walk along the top of the track. If siding with the Legion, one can find monorail sabotage plans in a terminal building garbage can. The plans include schematics and recipes for explosives and blueprints for a monorail car with several points of vulnerability marked.[4]

The monorail is a real world transportation system in Las Vegas, Nevada. Unlike the in-game equivalent, the real world monorail does not reach McCarran International Airport.