Mongrels are creatures that can be found in the Commonwealth in 2287.

Mongrels are aggressive and encountered frequently. Some have been domesticated once again by raiders and some friendly settlers. Mongrels will chase the player character and circle around them as they attack. They can be tamed with the Animal Friend perk.

These are typical specimens that are commonly encountered in the Commonwealth. They are mainly seen traveling in packs of up to four, which may include a stronger variant.

Stronger in every way than their counterparts, they are usually found with three or four other mongrels.

Similar in strength to the alpha mongrels, vicious mongrels are typically found in packs of 3 to 4, which may include a stronger variant.

A stronger type of vicious mongrel that is seen usually traveling with a few weaker variants.

A stronger variant of vicious mongrels with higher HP and Damage Resistance.

Mongrels that have albinism due to the high levels of radiation. Their stats are identical to alpha feral mongrels.

Glowing mongrels are the toughest type of mongrel with lower health than alpha rabid mongrels but higher damage and with an added radiation field.

Stronger variant of the glowing mongrel, usually the head of a pack of mongrels.

A pack of mongrel dogs 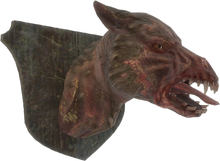