“A nearby Raider gang is calling you out! Time to show them who's boss...in style! Strap on your ring gear and start kicking butt!”

On the first ground floor, in the second room past the elevator, are three raiders. The room to the right has two raiders. On the second floor, in the rightmost room, are three radroaches. In the room to the left, is the Embalmer, a raider leader accompanied by two more raiders. You can speak to all the raider leaders on this quest, but all dialogue options on this quest will lead to a fight.

She is the first objective, who yields a legendary junk on her corpse (likely a military circuit board). The room to the left of that has a pair of raiders. The leftmost room of this floor is inaccessible from this floor. On the third floor, in the rightmost room, is a group of four raiders. The room to the left of that has Hatchet O'Houlihan, a raider leader accompanied by two raiders and the second objective. Kill them and Hatchet will yield a rare weapon on his corpse. 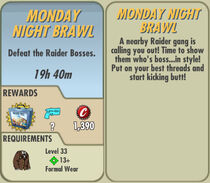 Rewards
Add an image to this gallery
Retrieved from "https://fallout.fandom.com/wiki/Monday_Night_Brawl?oldid=3043477"
Community content is available under CC-BY-SA unless otherwise noted.