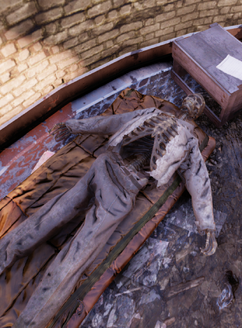 Brother Moncrief was a religious fanatic in the Cult of the Mothman.

Moncrief wrote a note to his High Priestess while residing at Landview Lighthouse. There, he observed fireflies while they were mating. His skeleton can be found lying on a sleeping bag at the top floor of the lighthouse. His voice can be heard during the event The Path to Enlightenment.

Brother Moncrief appears only in Fallout 76.

Add an image to this gallery
Retrieved from "https://fallout.fandom.com/wiki/Moncrief?oldid=3285104"
Community content is available under CC-BY-SA unless otherwise noted.