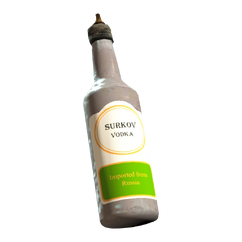 The Molotov cocktail is a weapon in Fallout 4.

A Molotov cocktail is a breakable vodka bottle containing a flammable substance such as petrol or a napalm-like mixture, with some motor oil added, and usually a source of ignition such as a burning cloth wick held in place by the bottle's stopper. The wick is usually soaked in alcohol or kerosene, rather than petrol.

In action, the wick is lit and the bottle hurled at a target such as a vehicle or fortification. When the bottle smashes on impact, the ensuing cloud of petrol droplets and vapor ignites, causing an immediate fireball followed by a spreading of flames as the remainder of the fuel is consumed. The initial explosion isn't very powerful, but affected targets take additional damage. They are especially effective against enemies that use Stealth Boys and other cloaking techniques, as the continued damage will force them out of stealth long enough to be targeted either normally or in V.A.T.S.

Easy to come by, the Molotov is a very simple grenade consisting of a rag and a full bottle of alcohol. Very common in the Commonwealth.

Retrieved from "https://fallout.fandom.com/wiki/Molotov_cocktail_(Fallout_4)?oldid=3279672"
Community content is available under CC-BY-SA unless otherwise noted.