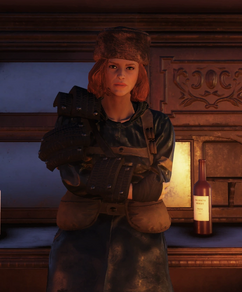 Molly is a member of the Raiders residing in the Crater in 2103.

Molly lived in South Boston before the Great War, which she describes as a rough neighborhood. She saw military blockades, trigger-happy policemen and, looming over everything else, crime lord Eddie Winter. She much prefers pouring drinks for the Raiders in Appalachia to her past life.[1]

When she arrived in Appalachia, she was one of three bartenders. Pretty Pete served alcohol and Lex served chems. However, both died early on, leaving Molly the only bartender. She now refuses to drink any kind of alcohol or take any chems.[2]

From Russia With Lev - Dependent on one's behaviour towards her, Molly can be bribed with either 300 or 500 caps to reveal the snitch, since she overheard the conversation with Lev before he fled the Crater.

Molly appears only in Fallout 76, introduced in the Wastelanders update.

Retrieved from "https://fallout.fandom.com/wiki/Molly_(Wastelanders)?oldid=3494489"
Community content is available under CC-BY-SA unless otherwise noted.