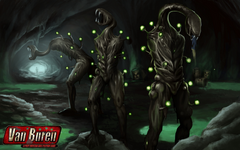 Molechs are huge, hulking, heavily irradiated Gehennas that exist primarily in the toxic caves of Burham Springs. They are similar in appearance to the Gehennas, but less humanoid and more monstrous. They do not have identifiable eyes, but small glowing green spheres of various sizes poke out from the skin all over their bodies. Their long, serpentine necks have a head that is essentially a huge, fanged mouth. Molechs spray streams of toxic bile from their green spheres and bite with their disgusting mouths. Molechs are more likely to spot immobile creatures than their Gehenna cousins.

Molechs were to appear only in Van Buren, the canceled Fallout 3 by Black Isle Studios.

Molech (also known as Moloch) was an ancient god worshiped in numerous Middle Eastern Bronze Age cultures, known for being associated with a particular type of child sacrifice. In English, "Molech" or "Moloch" refers to anything demanding a harsh sacrifice.

Retrieved from "https://fallout.fandom.com/wiki/Molech?oldid=3175805"
Community content is available under CC-BY-SA unless otherwise noted.