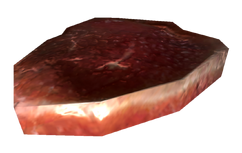 Mole rat wonder meat is a craftable food item in Fallout 3 which can be made with two simple ingredients and access to the Wonder meat maker, located within the Jury Street tunnels.

This section is transcluded from mole rat meat. To change it, please edit the transcluded page.

Mole rat wonder meat was first created in 2277 by a raider scientist named Ryan Brigg. According to his notes, mole rat meat becomes much more palatable after being cured in a metal box with wonderglue, producing a jerky which possesses a "nutty aftertaste" and none of the natural bitter flavor.

The wonder meat can be made very simply by taking a piece of Mole rat meat and a tube of wonderglue to Ryan's wonder meat maker and activating it, combining the two to create one piece of the wonder meat. They are not hard to find as these items are strewn all over the laboratory.

The wonder meat itself is 4 times more effective at HP regeneration than normal mole rat meat, bringing it up to 20, while not altering the rad value whatsoever. In combination with the food sanitizer, this boosts the healing factor to 24, on par with mirelurk meat, but without incurring the usual danger, difficulty, and general rarity of finding and killing the creatures. While the sanitizer is active, wonder meat is nearly on par with human flesh in terms of HP gain, and with far fewer rads.

Retrieved from "https://fallout.fandom.com/wiki/Mole_rat_wonder_meat_(Fallout_3)?oldid=3224781"
Community content is available under CC-BY-SA unless otherwise noted.