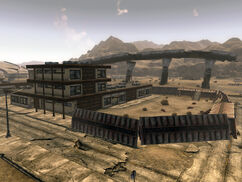 The mole rat ranch is a location in the Mojave Wasteland, situated southwest of Fields' shack.

The ranch consists of a large open area with several friendly mole rats. A hostile brahmin (without Animal Friend perk) can be found among them, usually having killed the entire pack when the player character arrives for the first time. The brahmin can be killed to save any mole rats that are still alive, though both the mole rats and the brahmin will respawn.

To the east of the ranch is a ruined building. Several traps are placed at each entrance, including mines and grenade bouquets triggered by tripwires. Inside the ruined building there is a Hard locked room that contains a sniper rifle and some .308 ammunition.

A copy of True Police Stories and a Patriot's Cookbook on the shelf, and a copy of Locksmith's Reader to the right in the small bookcase at the front door.

A short distance northeast of the ranch is the farm the brahmin are coming from. There is a trough with bits of meat in it, implying that someone trained the brahmin to eat meat.

The mole rat ranch appears only in Fallout: New Vegas.

Add a photo to this gallery
Retrieved from "https://fallout.fandom.com/wiki/Mole_rat_ranch?oldid=3284196"
Community content is available under CC-BY-SA unless otherwise noted.