Mole rats are creatures found in the Commonwealth, on the Island and in Nuka-World in 2287.

Mole rats are mutated rodents that are much larger than their pre-War counterparts, the naked molerat. They have survived as a species by burrowing underground where the soil protected them from direct nuclear explosions. However, they still were greatly mutated by the subsequent fallout, increasing their size as well as their viciousness. A few people in the wastes have even been known to train them and keep them as pets.

Mole rats range in size depending on the type being fought. They range in size from a house cat up to a large dog and possibly bigger. They have a bald, pink appearance, with large front teeth and small eyes. They are highly territorial and will attack anything entering their territory. They move quickly and will attack with a jumping lunge.

Mole rats in the Commonwealth possess a unique ability which is not found in specimens from the Capital and Mojave wastelands. They will tunnel to avoid their enemy or close in to attack unseen, they will also retreat to a tunnel if the player character moves to an area inaccessible to them, such as on top of a car. This makes them difficult to keep track of in groups. However, a faint outline of their tunnel can be seen as they move. This ability is shared with radscorpions. If the Sole Survivor uses a weapon dealing damage over time on a radscorpion or mole rat just as they burrow, they can die underground and the corpse will be irretrievable.

Mole rats are common pests in the wasteland, as they can be encountered as soon as the Red Rocket truck stop and as far as the Glowing Sea. Compared to many other enemies mole rats are generally weak. However, if allowed to swarm, they may become a problem since they have the ability to easily hide from the player character's sight and attack from behind.

Mole rats can be pacified through the Animal Friend perk.

The standard variation of the mole rat. With a mere 15 Hit Points, this enemy can be killed with a single hit from most weapons, making them more of a nuisance than a threat. The player character will most likely encounter these first at the Red Rocket truck stop, and they can be seen in various other parts of the Commonwealth.

As part of a random encounter, it is possible to encounter mole rats with fragmentation mines strapped to their backs. These will detonate on impact, dealing damage to anything at proximity. They will however always be found at USAF Satellite Station Olivia. They can also rarely be captured using cages.

These particular mole rats have absorbed massive amounts of radiation and consequently glow. The glowing mole rat produces radiation in a short perimeter around and benefits from radiation sources in the form of health regeneration.

The most powerful type of mole rat that can be encountered in the game. The mole rat brood mother is significantly more resilient than her children, but her attacks still only do minor damage to a well-armored player character. Two can be found in the secret part of Vault 81 during Hole in the Wall; this variant will give the mole rat disease if it hits the player character.

The mole rat queen is a cut variation of the mole rat which has an acidic spit attack, similar to the mirelurk queen.

Found in the Bradberton Amphitheater, wrangled by The Pack.

In the unused test cell RJAnglerTest, introduced in the Far Harbor add-on, a mole rat riding a motorcycle wearing a sea captain's hat can be found.

Mole rats appear in Fallout 4 and its add-ons Far Harbor and Nuka-World.

The mole rat model was created by Jonah Lobe.[1]

If the second perk of Sniper, is obtained, and a mole rat is about to enter their tunnels, there is a chance that they will stutter, and teleport constantly between the entrance and the endpoint of the tunnel. [verified] 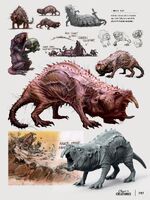 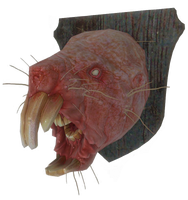