Mole rats are creatures found in the Capital Wasteland in 2277.

Mole rats are mutated rodents that are much larger than their ancestral species prior to the Great War.[1] They have survived as a species by burrowing underground where the soil protected them from direct nuclear explosions. However, they were still greatly mutated by the subsequent radioactive fallout, increasing their size and aggression. A number of people in the wastes have been known to train and keep them as pets.

Mole rats exhibit no signs of increased intelligence when compared to those alive pre-War. Their incisors show increased enamel and dentin growth, making them razor-sharp. In addition to increased aggressiveness, they are also highly resistant to pain.[1] They are generally found in packs of three to four, but are occasionally encountered in pairs or even by themselves. They are often witnessed standing on their hind legs and sniffing the air, allowing them to smell any approaching predators. They occasionally scratch at the ground, attempting to dig a burrow.

Mole rats are very aggressive but may retreat if severely outmatched. They fight for their food by biting at their prey with their large incisors. When attacking, mole rats charge towards their opponents and have a long melee range, with the ability to lunge several feet towards their opponent.

Mole rats are usually hostile unless the Lone Wanderer has the Animal Friend perk. They will fight alongside them in battle if they have the second rank of the perk, but not against other animals. 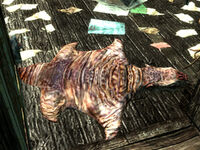