Mole rats have sharp claws and even sharper tusks that they use to tear great chunks of flesh from their prey. Mole rats are either huge rats or the result of gene-splicing Kodiak bears with maladjusted lab rats. Fortunately, they seldom run in packs larger than a half dozen or so.[Non-game 1] [Non-game 2]

According to the report, naked mole rats most closely resemble a Heterocephalus glaber, also known as the sand puppy or desert mole rats. Their enlargement is due to heavy radiation exposure. While larger than their ancestors, the naked mole rats have similarly low brain function, possibly due to an exceedingly tiny brain organ. Their incisors show increased enamel and dentin growth, making them razor sharp. In addition, the naked mole rats have extremely low levels of Substance P which results in incredible pain tolerance.

A mutated mole only found in New California. They can often be found in packs together with pig rats and giant rats.

A rare variety of intelligent hairy albino mole rat only found in New California. Their origins are unknown but like albino deathclaw, it appears to be caused due to a different mutation with the FEV.

They're a bit bigger than a normal hairy mole rat, have light brown hair and red eyes. They can talk and have relatively higher intelligence than the average. The only two known specimens are Keeng Ra'at and Brain.

In between the small giant rat and the mole rat.

A mutated naked mole rat found in East Coast and the Mojave Wasteland. They have very little hair on their body and are usually found in packs of three or four, rarely appearing alone or in pairs.

These are young naked mole rats and are smaller and weaker in combat. They usually stay close to their mother.

These are giant mutations of the regular mole rats in Fallout 3, used as transport. They were featured in the The Art of Fallout 3, but were cut from the game.

Mean, standing over three feet at the shoulder and weighing in at around at 200 pounds, these critters are fierce and dangerous.

A bulkier female mole rat that can be encountered alongside her brood. The mole rat brood mother is tougher than her children, but her attacks still only do minor damage to a well-armored player character.

Found within the Vault 81 testing area, those lab mole rats will transmit the mole rat disease when hitting the player character. There are several variations of Vault 81 mole rats, ranging from the standard variant to glowing variants.

Naked mole rats are a real species of rodent native to East Africa. They share the same general appearance as the mole rats featured in the Fallout series. 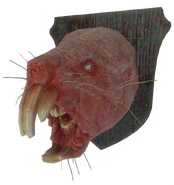