View source
Fallout 76 / Wastelanders / One Wasteland For All consumable

A small metal box whose appearance depends on the item's quality. When used, the player character will receive an amount of items depending on the quality of the pail. Crafted variants have a higher chance of dropping rare rewards.

New variants of each type of mole miner pail were introduced with the release of One Wasteland For All. While they feature an expanded rare item list and reward contextual ammo, the pails do not reward common or rare taxidermy plans like their Wastelanders equivalents.

Unlike the Wastelanders pail variants, the One Wasteland For All pails cannot be dropped, traded, or sold to vendors. Both sets of variants have identical names and are visually indistinguishable from each other. 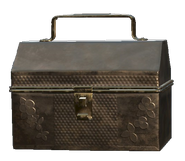