A bleak remnant of Appalachia's storied past, the mole miners are a mutated form of human that make their homes in the many caves, mines, and above-ground mining locales of the region, trapped within their deteriorating mining suits. The mole miners are frenzied combatants who attack anything they perceive as a threat.[1]

Despite their suffering, almost all of their cognition and human-like behavior remains, with mole miners frequently carrying things they considered important in a previous life, such as keys to their old mining lockers.[2] A unique mole miner named Purveyor Murmrgh has even gone so far as assembling vending machines, opening up a trading post at Berkeley Springs Station prior to relocating to the Rusty Pick. Here, she sells her wares for a price. The mole miners were first encountered in Welch and experimented upon by the Appalachian Enclave and its Research Division prior to their collapse in 2086.[3] There are no additional known records of another encounter until the Fire Breathers engaged mole miners in a firefight in March 2095.[4]

The particular cause of their significant degeneration is unclear, whether it is caused by radiation, the toxic atmosphere of their underground dwellings in the Ash Heap, or a combination of both. However, it is significant enough to prevent them from breathing normally without their Filter-O-Matic respiration device and breathing apparatus. Mole miners are highly communal and are rarely (if ever) encountered outside of their organized groups. Their hierarchy follows the organizational structure of pre-War mining operations, with the actual miners (including scrapers, diggers, and rockbreakers) led by foremen and supervisors, a testament to their pasts as coal miners.

At some point, the Vault 76 overseer was seriously injured by a mole miner at the Mountainside Bed & Breakfast and left a holotape log detailing the experience.[5]

Openly hostile to nearly everyone (save for Purveyor Murmrgh, the only known exception), the mole miners are highly aggressive, well-armed, and have even managed to domesticate mole rats.[6] They make use of a variety of shotguns, assault rifles, missile launchers and improvised weapons to attack their enemies while using their mole rats as anything from standard attack animals to mobile landmines.

Once human, the mole miners have since degenerated into stout, squat, and hardy humanoids that display an extreme hostility towards those outside of their groups. Their limbs are extremely short and thick and what can be seen of their face is grossly disfigured beyond the confines of their mining equipment. Their eyes unnaturally bulge, with little in the way of recognizable facial structure. They stand affixed in a permanent hunch with their limbs tucked closely to their body.

Though only moderately intelligent, mole miners require their breathing apparatus and respiration device to survive, suffocating without it.[7] They communicate in proper English,[8] though it is garbled due to the mining breathing equipment, giving the impression of mindless mumbling.

Their mutations have endowed them with powerful strength that allows them to wield heavy weapons frequently and effortlessly. Their aggression and hardiness render them capable of warding off staggers and their fast speed allows them to close the gap between themselves and enemies fairly quickly.

Mole miners often live in organized groups and are usually led by a foreman or supervisor. They are immediately hostile to anyone who approaches them except for mole rats that are friendly to them, joining alongside to fight opponents together to gain an advantage.

They often mobilize against their target with weapons of great damage such as shotguns or missile launchers. They can easily and quickly mow down low-level player characters. They are mainly located near mining areas in groups, although they can be seen everywhere.

A charred, fleshy variant of the mole miner infected with the Scorched Plague. All regular mole miner variants have a corresponding Scorched variant with the same stats, abilities, and items. They may become Scorched when attacked by scorchbeasts or the scorchbeast queen, becoming allies with other Scorched creatures.

An immensely powerful Mole miner wearing a light blue cloak and heavy ore backpack, who serves as the boss of daily ops when the enemy faction are mole miners.

A unique mole miner variant encountered during the Hunt for the Treasure Hunter community event. They wear a hand truck strapped to their back acting as an oversized backpack, with various bags and other objects tied to the cart with rope. A sound machine strapped to treasure hunter backpacks emits a distinct radio-like frequency mixed with Morse code.

The Treasure Hunter may replace any standard NPC spawn in the overworld - they cannot replace NPCs spawned in interior locations, or those spawned by events, random encounters or quests.

Mole miners appear only in Fallout 76.

Note: these lines are the script notes for the voice actors, and are not considered canonical. 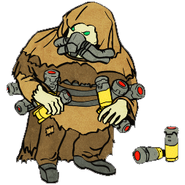 A mole miner, as shown on the Overcharged Core legendary perk card