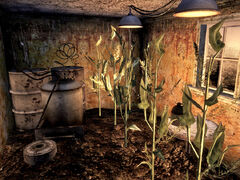 Clearly a setup for moonshining

The Mojave house is an unmarked location in the northern Mojave Wasteland, north of mole rat ranch and west of Fields' shack.

The single-story house looks like many other boarded-up adobe houses in the wasteland, though this one is accessible. However, an Average lock on the front and back doors secures the house and picking the locks will result in negative Karma. To the left of the entrance, there are two lawn chairs next to a refrigerator. Behind the house is a mailbox.

The most obvious detail is the floor covered with soil and maize stalks jutting up throughout the house. In front of the entrance is a refrigerator and an oven to the left. To the right of the entrance is a still. In the middle room, there is a doorway to the bedroom with a usable bed, empty dresser, first aid box, and an unlocked wall safe with random loot. In the backroom is a table with two ammunition boxes.

The Mojave house appears only in Fallout: New Vegas.