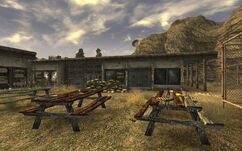 The barracks are located between the headquarters and Unification Monument, on the southern side of the I-15. It consists of a bar, behind which Lacey can be found selling alcohol, among other items. To the left is a small kitchen section with a refrigerator. Continuing left is the actual barracks, with many bunk beds that may also be used by the Courier.

The building is populated with many NCR troopers, Lacey, Rose of Sharon Cassidy, and a caravaneer. The NCR sniper Ranger Ghost can be found in her overlook on the roof.

The Mojave Outpost barracks appear only in Fallout: New Vegas.

Duck and Cover!
Add a photo to this gallery
Retrieved from "https://fallout.fandom.com/wiki/Mojave_Outpost_barracks?oldid=3450583"
Community content is available under CC-BY-SA unless otherwise noted.
... more about "Mojave Outpost barracks"
RDF feed
Has platform
PC +, Playstation 3 +  and Xbox 360 +