Can You Find it in Your Heart?
Cold, Cold Heart
Heartache by the Number
Keep Your Eyes on the Prize
My Kind of Town
You Can Depend on Me

Fallout: New Vegas
“It's like a brahmin drive gone wrong. Supposed to be a gate north, but you come here, you get caught in the pen. Better to head back home.”— Rose of Sharon Cassidy

NCR Ranger Outpost Mojave,[1] usually referred to as just the Mojave Outpost, is the gateway to the Mojave Wasteland and the first stop for caravans traveling from the core lands of the New California Republic to New Vegas and beyond. It is also a military hub for all operations in the southwestern Mojave.

Located near the state line of California and Nevada, the outpost served as a checkpoint along Interstate 15 before the war. This location now marks the boundary of fully NCR-controlled territory.[2]

The outpost features the Unification Monument, a visible and distinctive feature commemorating the historic merging of the Desert Rangers of Nevada and the NCR Rangers. Nearly two centuries after the war in 2271, representatives from the two groups met here to establish terms of the Ranger Unification Treaty, joining forces against the threat of the Legion.[2] The two forces merged, in exchange for NCR extending its jurisdiction to southern Nevada, New Vegas and the Hoover Dam.[3][Non-canon 1] After the war, now-derelict vehicles remain along the interstate and at the checkpoint, which now serves as a resting area for brahmin.

In 2281, the outpost acts as an administrative hub and command center, tasked with clearing caravans and handling the logistics of protecting those traveling along the roadway. The location serves as a stopover for the southeastern Mojave, responsible for protecting the stretch of the I-15 south of Primm and Highway 95.[4][5] Soldiers posted here act as border guards, ensuring the safety of caravans traversing along the interstate.

Although the post at the checkpoint is not optimal, it is safer than an assignment in the east or along the Colorado River.[4] The relative safety of the location has resulted in soldiers being siphoned off to tend to these increasingly pressing needs elsewhere in the region. When the NCRCF prison break occurred in 2281, the outpost was forced to establish a permanent outpost at Primm, the standing force lapsed in their ability to patrol the highway and ensure its security, as regulations require the outpost to maintain a certain minimal headcount.[6][7]

As a result, with threats unchecked on the interstate, caravans are slowly backing up at the outpost waiting for the roads to clear or their clearance papers to come through.[8] The outpost bar, anticipating a benefit from the influx of stranded traders including large caravan outfits, instead experienced traders holding fast to their caps, unwilling to spend them here.[9] The soldiers that remain here are anxious, reporting that if the Legion's forces are successful in pushing past the nearby town of Nipton, the outpost itself will become the frontline.[10]

The outpost consists of two buildings on a hill saddle, one of which is the headquarters and the other being the barracks. Ranger Ghost, an NCR sniper, is posted on top of the barracks building. She offers the Keep Your Eyes on the Prize quest. There is a fence enclosing the two buildings on all sides and several piles of sandbags for defense.

The roadway in front of the buildings and fences is part of what was once a highway checkpoint station. The northern end of the valley is overshadowed by two large statues and the southern is enclosed by rock walls. Sgt. Kilborn can be found patrolling the road leading to the outpost, and a single traveling merchant moves between the outpost and the Nevada 164 junction down the hill each day.

The gate to the southwest continues along the I-15 but it is locked and requires a key to open. A few remnants of structures and a few power lines can be found, complete with collision data. If the NCR is targeted in The Apocalypse quest during Lonesome Road, the gate will become unlocked and leads to Long 15.

Upon entering the headquarters of the building for the first time, the Courier will be greeted by Major Knight, who can repair items to 100% in addition to his possible role in the My Kind of Town questline. Ranger Jackson can usually be found in one of the building's rear rooms. He offers the Can You Find it in Your Heart? quest in addition to figuring in Heartache by the Number.

Lacey tends the bar in the barracks and offers a variety of goods for sale as well as games of Caravan. A copy of Duck and Cover is found under the counter, which can be purchased from her or stolen.

Rose of Sharon Cassidy, also known as Cass, sits at the bar drowning her sorrows with whiskey. Cass can eventually be recruited as a companion, once the player character begins the You Can Depend on Me questline.

The Mojave Outpost appears only in Fallout: New Vegas, and is mentioned in its add-on Honest Hearts.[11]

The Mojave Outpost is located in the same geographical area as the real world Mountain Pass, California, situated along I-15 between the Clark and Mescal mountain ranges. 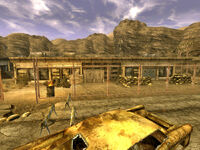 The Mojave Outpost in the evening

Front desk of the HQ 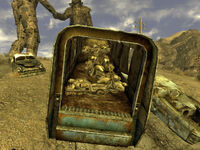 Some motorcycles on the way up the hill

Trucks heading to the outpost

Ranger Ghost on the barracks' rooftop

The monument in a Lonesome Road ending 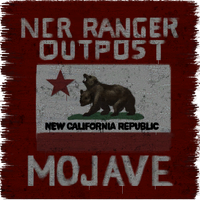