Fallout: New Vegas
“With the expansion of post-apocalyptic society across the American southwest, courier groups like the Mojave Express have appeared to take on the difficult task of carrying letters and packages over enormous distances.”— Fallout: New Vegas loading screens

Mojave Express is a delivery company headquartered in the Hub and with a branch in Primm in 2281.

The Mojave Express is one of many courier groups that have emerged with the NCR's eastward expansion to tackle the task of carrying letters and other packages across enormous distances of the American Southwest.[2] The Mojave Express couriers will deliver messages and other items from the Mojave Wasteland to New California and everywhere in between. The company is based out of the Hub.[1]

The Courier was hired to deliver a package to New Vegas from Primm.

Dropboxes operated by this company allow the player character to move items between different locations. A dropbox exists within the Mojave Express building, and four more can be found throughout the Mojave Wasteland, located in Goodsprings, Novac, Freeside, and on the New Vegas Strip.

Joshua Sawyer stated that the team intentionally left the Courier's originals and the exact nature of the initial transaction vague.[Non-canon 1]

The Mojave Express in the opening scene of Fallout: New Vegas 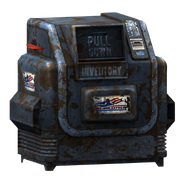 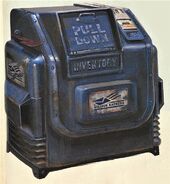