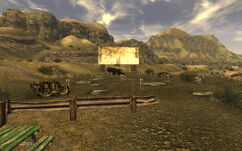 “As far as you can tell, it appears to be an invitation to the Midnight Science Fiction Feature! at the Mojave Drive-In (please arrive early to catch the trailers).”

The Mojave Drive-in is a location in the Mojave Wasteland, directly southwest of Nipton.

When approaching from Nipton, a Jackal gang leader and several gang members may be found near the screen, traveling from Nipton Road pit stop, en route to Bradley's shack. Various mole rats may spawn in the location's outskirts as well. A closed train tunnel is located almost due south. The platform area has a single lottery ticket on the ground in front of the maintenance door, though the door itself is boarded up and inaccessible.

With the Old World Blues add-on, in the center of the area is a crashed satellite with an American flag on it. At midnight, the crashed satellite will begin a display on the drive-in screen at which time the Courier may activate the Old World Blues add-on. During all other times, the words "Joshua Graham lives" and "The Burned Man walks" can be seen written on the movie screen.

The Mojave Drive-in appears only in Fallout: New Vegas.

The satellite in the morning

Mojave Drive-in projector at night
Add an image to this gallery
Retrieved from "https://fallout.fandom.com/wiki/Mojave_Drive-in?oldid=3218021"
Community content is available under CC-BY-SA unless otherwise noted.