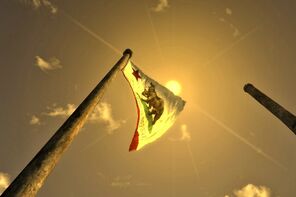 Dependent on the Courier's actions

The Mojave Campaign, also known as the Pacification of the Mojave, is a New California Republic military offensive, beginning in 2253 with the objective of annexing the entire Mojave Wasteland.

The campaign erupted after the massacre of 38 NCR citizens at the hands of Mojave raiders in 2253. President Tibbet subsequently lost a motion of no confidence. Her replacement, Wendell Peterson, ordered three battalions of NCR infantry into the Mojave, beginning the campaign.[1] The campaign's initial intent was to pacify all raider forces to make safe headway for NCR citizens, but has since shifted the aim to remain in control of the Hoover Dam and prevent Caesar's Legion from advancing across the Colorado River and in turn, keeping them from endangering the Republic to the west.[2]

To secure transportation routes from the Mojave to the NCR in the west, the Mojave Outpost was established in 2272.[1] As early as 2273, the New California Republic sent Rangers out east to scout for anything of interest.[3] Most importantly, the Rangers discovered that the pre-War city of Las Vegas (now renamed "New Vegas") had been relatively untouched by the Great War and that Hoover Dam was in repairable condition. Realizing the militaristic and economic values of these locations, the Republic quickly sent a detachment of their army in 2274 to take control of the New Vegas region in hopes of using the rich resources there to their advantage[4] The NCR, after having moved in the Mojave area, seized other nearby areas such as Bullhead City in what came to be known as the "Pacification of the Mojave."[1]

Once they were able to mobilize a sizable force, the NCR occupied the Hoover Dam. If not for the Treaty of New Vegas the NCR reluctantly signed in 2274, the Republic would have marched on the city and taken it soon after occupying the dam. With the treaty, the NCR was given control of Hoover Dam and was allowed to divert 95% of the electricity generated to the Republic's core regions, while diverting the remaining 5% to the Strip. Also, the NCR was allowed to deploy its military forces in the region and allow NCR citizens to visit the Strip without interference but would have to recognize New Vegas independence. To ensure Mr. House stayed true to the treaty, the NCR Embassy was established on the Strip after the treaty was signed.[1][4]

The city took off when Hoover Dam was started up again and began providing power to the Strip. The upper class citizens of the Republic trickled in to see the city, curious of such a place.[1] Even so, the New California Republic is having difficulties administering such a large region. The campaign is a logistical nightmare, with supplies and troops being slow to get anywhere and Republic funds for both are tied up in the Los Angeles Boneyard, where Senate elections are underway.[5] The Mojave Campaign is so unpopular with NCR citizens, that senators do not want to ruin their chances at an election by diverting funds into a desert that many will never see and have their brothers, sisters, sons, and daughters die there.[6] In addition, defending Hoover Dam, keeping it operational, and bolstering defenses against Caesar's Legion is a tall order to fill; to date, only the former two can be accomplished.[5]

First conflict with the Legion

The NCR's newfound wealth and territory would soon come under threat however, from the looming power of Caesar's Legion. Under the command of the Malpais Legate, Legion forces marched against the NCR garrison at Hoover Dam, in an attempt to take the strategic asset and river crossing, in what became known as the First Battle of Hoover Dam.[1] Malpais Legate advanced against the NCR defenders but his forces were unable to penetrate the Republic's defenses. The 1st Reconnaissance Battalion and NCR Rangers, under the command of Chief Hanlon, executed a tactical retreat west across the dam and into Boulder City after using their prowess in marksmanship to kill the Legion's centurions and decanus from afar, an act that prompted the Malpais Legate to order the Legion's elite forces to push forward in pursuit of the enemy sharpshooters.

He realized too late that the Rangers and First Recon had booby-trapped Boulder City, laying explosives all along their route of retreat and throughout the city itself. When the Legion's elite forces entered the city, the Rangers and First Recon detonated the explosives and inflicted severe casualties on the enemy, crippling their offensive. Shortly after the few survivors of the trap at Boulder City were finished off, NCR troopers under the command of General Lee Oliver then counter-attacked, pushing back and eventually routing the Legion's main force after having successfully held the dam.

Continued conflict with the Legion

The Legion would not stay quiet for long. One of the NCR's forward bases, Camp Nelson, was completely obliterated by a Legion task force in an eerie repeat of Fort Aradesh's loss. Another camp, Searchlight, was heavily irradiated in a Legion feint, which transformed all the survivors of that base into feral trooper ghouls.[7] Led by President Kimball and General Lee Oliver, morale among the soldiers is at an all-time low, and desertion rates are high. The main camp on the front lines is Camp Forlorn Hope, though nicknamed by the soldiers and citizens of the Mojave, which as its nickname suggests, is full of depressed and constantly embattled soldiers.[8] They are holding a defensive line across the Colorado River and preparing for the upcoming battle on the Hoover Dam that could decide the fate of the entire area. The soldiers have spread far too thin across the front thanks in no small part to both Oliver's insistence on massing troops and resources at Hoover Dam at the expense of the rest of the front lines and bureaucratic red tape to prevent the Legion from crossing the river, as is illustrated by the attacks on Nipton and Ranger Station Charlie.[9]

The NCR aims to wrestle control of the Strip from Robert House eventually, but cannot do so while Caesar's Legion remains a threat. While the NCR does openly engage Legion patrols upon sight of them, such efforts have proved futile in any sort of long-term damage to the Legion. The Securitron armies possessed by House pose a massive threat to both the NCR and the Legion, but this uneasy stalemate between the three factions is threatened by the arrival of the platinum chip. In addition, the Mojave Campaign has become increasingly unpopular amongst NCR citizens, mostly in regions far away from Vegas, to whom the campaign is nothing but taxes and lost children. Senators opposed to the war leverage this unrest to their advantage in the upcoming Senate elections of 2281.

Conflict with the Brotherhood of Steel

In 2274, the NCR moved into the Mojave Desert region to occupy Hoover Dam.[10] As a result of the Brotherhood of Steel's disagreement with the NCR about how technology should be controlled, a series of violent confrontations took place.[11][12][13] The NCR attacked and occupied the Brotherhood's fortifications at the HELIOS One power plant, part of "Operation: Sunburst."[Non-canon 1] Despite the efforts to hold the plant, the Brotherhood forces were forced to retreat, suffered a loss of more than half of its paladins and knights, and the disappearance of their leader, Elder Elijah.[14][15] After the loss at HELIOS One, the Mojave Brotherhood's new leader, Elder McNamara, restricted all activity outside of the bunker and forbade engagement with NCR forces.[16][Non-canon 2] Afterward, the NCR left a small fighting force at the plant, sent the rest sent onward to Hoover Dam, and over the next few years, increased its military presence in the Mojave fivefold.[17][18][19]

Conflict with the Great Khans

In the early parts of the war, the Great Khans took to raiding NCR military outposts and civilian settlements. The NCR then stated launch counter-attacks against the Khans. They eventually traced a group of Khan raiders to their settlement at Bitter Springs, leading to the Bitter Springs Massacre.[1] The Khan leader Papa Khan now holds resentment against the NCR and is contemplating joining an alliance with Caesar's Legion.[20] He has also forged an economic arrangement with the Fiends, selling them chems so they will harass the NCR in return.[21]