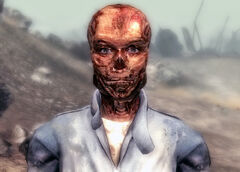 Moira as a ghoul after the destruction of Megaton

A self-styled inventor, 24-year-old Moira grew up with an uncommon curiosity about the world in the trading community of Canterbury Commons. Sometime before 2263, she moved to Megaton.[1] She's read almost every book that's come through the town. Although Moira's reading has taught her a wide variety of useful knowledge she has nearly no actual experience with the world, so she doesn't always understand how it can be applied outside of her workshop. After a recent accident with a domesticated centaur, Moira was inspired to write a book to help others survive in the wasteland and avoid similar dangers.[2]

After the guide was completed (with the help of the Lone Wanderer), it achieved considerable popularity, managing to reach places like the distant Mojave Wasteland in less than four years. By the time of Fallout 4, the Wasteland Survival Guide had become a series, with multiple guides on subjects ranging from self-defense to hunting and farming, many of such issues can be found in the Commonwealth.

Moira is the owner of Craterside Supply. She spends the day sweeping and trading as well as conducting odd experiments. She opens the store at 8:00 a.m. and closes at 8:00 p.m. The Megaton Craterside Supply store is also her home. She sleeps upstairs and if the Lone Wanderer is caught trespassing after hours she will become increasingly upset. The only time she will leave her shop is if Megaton is destroyed in the quest The Power of the Atom. If the Wasteland Survival Guide quest is completed before Megaton is destroyed she will instead stay near the entrance to the ruins and only has the option to repair equipment, lacking an option to buy or sell items.

Retrieved from "https://fallout.fandom.com/wiki/Moira_Brown?oldid=3447379"
Community content is available under CC-BY-SA unless otherwise noted.