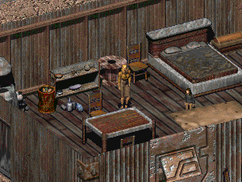 “The grease on this brahmin calf is getting a bit thin. Soon, one of the powers is going to have to make a major play to take Redding before the others do. When that happens, people are going to get hurt. A lot of people.”

Madame Modjeska is the resident political expert of Redding in 2241.

Once Louise's prostitute caretaker (hence the title of Madame), Modjeska is an expert in politics that involve Redding. She possesses a keen intellect and superb observation skills, allowing her to analyze and identify motives of people trying to take her city over. She is also a Jet jockey and alcoholic, seeking refuge from her bleak life in drugs.

She lives with an adopted orphan, who, curiously, also seems to take Jet along with her caretaker.

Madame Modjeska can give the Chosen One insight into the current political situation in Redding; specifically, where it stands in relation to the three powers of the wasteland: NCR, Vault City and New Reno.

Madame Modjeska appears only in Fallout 2.

Retrieved from "https://fallout.fandom.com/wiki/Modjeska?oldid=3345860"
Community content is available under CC-BY-SA unless otherwise noted.