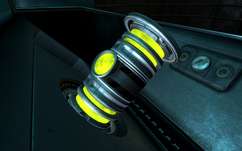 The American Dream
Project Impurity
Take it Back! 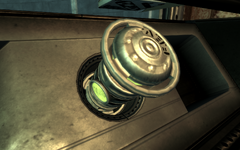 The modified FEV is a quest item in Fallout 3. It is given to the Lone Wanderer by John Henry Eden in Raven Rock and can be inserted in the Auxiliary Filtration Input in Jefferson Memorial's Rotunda, contaminating the purifier's filter system and, subsequently, the Capital Wasteland's waters during the quest Take it Back!.

This vial contains a modified strain of the Forced Evolutionary Virus developed by President John Henry Eden, based on the earlier FEV Curling-13 strain used by the Enclave's Chemical Corps in 2241, only now it was designed to be placed into Project Purity's water purification system.[1] According to President Eden, the virus is designed to only target super mutants, ghouls, and all other "unclean" citizens, namely anyone who had been born in the Wastelands and exposed to radiation and other mutational effects from birth. The only people who would survive the infection are dangerous radiation level free humans and pure humans who were born in the Vaults.

A vial of modified FEV is forcefully given to the Lone Wanderer by Eden in the hope that they will insert it into Project Purity.

During the events of the add-on Broken Steel, if the player had chosen to contaminate the purifier with the modified FEV, what President Eden said is confirmed for as accurate and the FEV completely lethal. The medical facility of every city in the Capital Wasteland (except Tenpenny Tower and Paradise Falls) is filled with new patients dying from FEV infection. These new patients hold their stomachs and repeat dialogue along the lines of, "it burns on the inside." According to both Doctor Preston and Doctor Barrows, the FEV specifically targets the immune system of infected individuals, which in turn makes them vulnerable to other diseases. This occurs in both humans and ghouls, despite the latter's immunity to most diseases.[2][3] Along with affecting the immune system, the FEV severely weaken individuals both physically and mentally until it simply kills them.[4] The modified FEV is also completely undetectable by any kind of test meaning there's no possible way to screen water that has been infected as it only comes back as clean, purified water.[5]

The FEV is contained to only those that have ingested infected water as the transmission of FEV is impossible from physical contact or bodily fluids. In Rivet City, Dr. Preston comments that they are burning the corpses just to be safe.[2] The spread of FEV is contained to only bottles of Aqua Pura and the Tidal Basin for now. However, eventually, the spread of the FEV infected water will spread from the Tidal Basin and affect all water in the Capital Wasteland.

Retrieved from "https://fallout.fandom.com/wiki/Modified_FEV?oldid=3178482"
Community content is available under CC-BY-SA unless otherwise noted.