W05_MQS_202P_ActorSpy (spy)
W05_Settler_Mochou (Settler)
“If I give you this suit then they'll come for you... and they'll find me. Maybe not tomorrow, but eventually. They will kill me for it. I don't care if I die, I may as well already be dead. But they will also kill Jen, and I can't risk that.”

Agent Mochou is a former spy for the People's Liberation Army who lives in Appalachia.

A lifelong agent trained from birth in the People's Republic of China for this singular purpose,[1] Mochou, under the threat of death, was assigned to the American theater and worked closely with other communist operatives against the American war effort. Orders and a lifetime of being shaped to think as Chinese commanders wanted her to think resulted in an incredibly capable and loyal agent until the Great War happened and Mochou realized the two superpowers both lied to their people, manipulating them like puppets.

Once she saw the puppeteers, she realized she wanted nothing to do with any of it; she did not wish to return to China and fled into the wasteland instead. Mochou fell in love with a man who was another Chinese spy and she gave birth to Jen sometime after the War; both the relationship and Jen's birth were forbidden under the Chinese orders.[2] Jen's parents taught her Chinese, how to scavenge in the wasteland to survive, and they did not indoctrinate her into communist thought. The family lived together in the Capital Wasteland.[3]

Mochou assumed that all governments had fallen, including China. However, she was wrong: Another pre-War asset, loyal to the communist cause beyond nuclear fire,[4] tracked her down using trackers embedded in her gear, and presented an ultimatum: Follow orders or have her and her family be killed. Sometime around 2092,[5] she abandoned her family, disappearing overnight, to avoid dragging them into the invisible war.[6][7] Jen and her father moved on, assuming Mochou had died, and Jen began to forget her mother's face and what she looked like.

Agent Mochou appears in Fallout 76, introduced in the Wastelanders update. 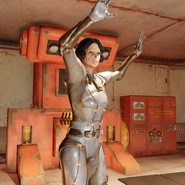 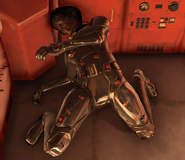 Mochou if she is killed by the player

Mochou at Foundation if the player spares her life