Doctor Mobius is a think tank operating in the Big MT in 2281. He is the leader of the robo-scorpion army and nemesis of Dr. Klein and the team to which he belonged.

Doctor Mobius was one of the Big MT "Think Tank" executives before the Great War. Sometime after the War, he became a think tank in order to continue his work at Big MT. Like the others, he forgot a part of his personality and his real name, due to the recursion loop in their new perception programming.

After the escape of the cazadores and night stalkers, Mobius became disillusioned with the methods of the other think tanks. He grew tired of the endless and horrible experimentation and was deeply afraid of the damage the amoral and psychosis-ridden think tanks would wreak upon the fragile, post-apocalyptic world in the name of science. He erected a radar fence, a kind of radar-guided repulsive field, around the perimeter of Big MT to prevent the disembodied brains from escaping into the wasteland.

After a severe dispute with Klein, Mobius removed all the chips of all personalities of The Sink; his room and personal laboratory, and against their will, hacked the data banks of his colleagues, reprogramming their chronometers, geometers and cartography programs, making them lose their sense of history, time and the world beyond Big MT to the point that they now believe Big MT is the world and nothing exists beyond its mountainous boundary. He also actively fostered the false notions that robo-scorpions are somehow able to consume intelligence from brains, fueling the Think Tanks' fear of leaving Big MT's central dome. In the process of making these alterations, though, he also damaged some of their memories and knowledge, leaving only mangled, disjointed versions behind. Disgusted to have done this to his friends, he also erased some sections of his own memory, like this event and his pre-War creation, the robo-scorpion, before exiling himself.

Afterward, Mobius moved to the X-42 robo-warfare facility (which he renamed the "Forbidden Zone") and began to "recreate" the robo-scorpion, inspired by radscorpions that had wandered into Big MT. These new versions included all features of the pre-War model, such as an energy bolt blaster in the tail, highly sensitive robotic eyes, and communication systems connected directly to his stronghold. Now in possession of a proper army, Mobius decided that without something to distract the other think tanks, the radar fence would eventually become insufficient to contain them. He began to send repetitive, threatening broadcasts, designed to instill fear and prompt the think tanks to focus on retrieving technologies with which to defend themselves. With the remaining think tanks trapped in the central dome by their exaggerated fear of Mobius, the Big MT fell mostly silent.

Although not originally aggressive in his intentions, Mobius' own behavior seems to have degraded over the years, likely in part due to an increasingly serious addiction to Mentats and Psycho. By 2281, he had not only lost the functionality of his right "eye" monitor but also began to suffer from short term memory loss, hallucinations and obsessive-compulsive behavior. Although his plan had been mostly successful, the recent arrival of Father Elijah, Christine and Ulysses from the Mojave has caused the curiosity of the think tanks to begin pushing beyond the boundaries he had set for them.

The arrival of the Courier, and the subsequent survival of their lobotomy proved to be the last straw. Mobius unleashed a fresh wave of robo-scorpions and announced his false intention to finish the other think tanks off once and for all, while subliminally suggesting to them that various technologies around the Big MT would help them against him. These technologies, a sonic emitter, an X-2 antenna, and a Stealth suit Mk II are actually all the components required to rehouse a brain inside a body. Eventually, the Courier defeats the X-42 giant robo-scorpion, enters the Forbidden Dome and confronts Mobius. 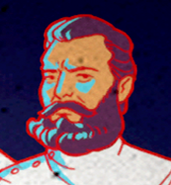 Mobius before becoming a think tank

Mobius on the screen in the Think Tank