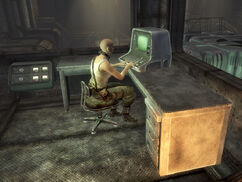 This is the safest place to control the power

“There - the Switching Station. That's where you'll need to bring the mute.

Mixed Signals is a quest in the Fallout: New Vegas add-on Dead Money.

This quest starts after the quests: Find Collar 8: "Dog", Find Collar 12: Christine and Find Collar 14: Dean Domino have been completed, and the Courier's team has been gathered at the fountain in the center of the Villa. The objective of this quest is to escort Christine to the Puesta del Sol switching station. Once there, she can use her computer skills to reroute the Villa's power as part of Father Elijah's plan to activate the gala event, which in turn will open the doors of the Sierra Madre Casino & Resort.

This is one of three quests where team members are placed in specific areas of the Villa. The quests can be done in any order.

Sometimes Christine will not get to the elevator or the terminal, so, if she cannot find a way to follow, go up in the elevator and go back down, and she will teleport to the Courier.

Retrieved from "https://fallout.fandom.com/wiki/Mixed_Signals?oldid=3137998"
Community content is available under CC-BY-SA unless otherwise noted.