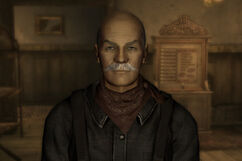 “Welcome back. I had hoped you wouldn't have to see me again so soon. What can I do for ya?”

Doc Mitchell is a surgeon and doctor living in Goodsprings in 2281.

Mitchell was born in Vault 21, where he was known by the nickname "Mole Butt" by the younger residents. He left at some point after it was opened, becoming a traveling doctor to help the people of the wasteland. As Mitchell got older, he returned to New Vegas and married his childhood sweetheart. Some time afterward, he retired to Goodsprings, serving as the town doctor.

His wife died after a while, but he does not dwell on the past. Visiting Vault 21 and talking to Mitchell again has him explain that he was going to California with his wife. Due to the weak immune system she had from living in a vault her whole life, she passed away in Goodsprings, forcing Mitchell to settle down there so he could always remain close to her.

When the Courier was ambushed and shot in the head by Benny, Victor brought them to Mitchell for treatment. On October 19, they made a miraculous recovery thanks to the medical care provided by the doctor.

Mitchell's dialogue is influenced by the Courier's choice of S.P.E.C.I.A.L. attributes.

* Only during Run Goodsprings Run.

Doc Mitchell appears only in Fallout: New Vegas and is mentioned in the add-on Old World Blues.[2]

Doc Mitchell will not fix radiation poisoning if you select any other fix after that choice, until you exit out of dialogue with him. [verified]

Doc Mitchell eating
Add an image to this gallery

Retrieved from "https://fallout.fandom.com/wiki/Mitchell?oldid=3136599"
Community content is available under CC-BY-SA unless otherwise noted.