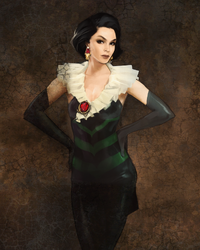 Shannon Rivers as the Mistress of Mystery

The Silver Shroud
The Mistress of Mystery 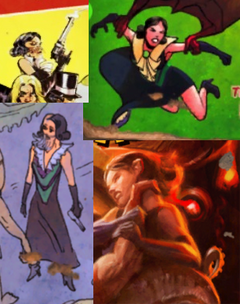 The Mistress of Mystery as she appears on the Unstoppables magazines

The Mistress of Mystery is a fictional character created by Hubris Comics who appears in Fallout 4 and Fallout 76.

She is shown to carry a .44 revolver called the Voice of Set on the Unstoppables covers and mentions using a weapon she calls the Blade of Bastet in the radio show. She's also an accomplished unarmed fighter, mostly relying on kicks. She wears long black gloves, a black evening gown with a white collar of several styles, and black heels. She tends to speak in alliteration. In Fallout 76, it is revealed that she used a Phantom Device for escapes.

Her radio voice actor was Shannon Rivers, who was also poised to portray the hero on the Silver Shroud television series. Producer Aaron Babowski replaced her with Claire Redelle, but the Great War prevented filming. In addition, a Mistress of Mystery television show was in production, also cut short by the Great War.[1] Shannon and her husband Frederick survived the war and founded the Order of Mysteries based on the ideals of the fictional hero. The Order members were herself, her daughter, and many orphaned girls. They each wore and used recreations of the hero's equipment developed by Shannon's husband.

The Mistress of Mystery is mentioned in Fallout 4 and Fallout 76.

With the crew
Add a photo to this gallery

Retrieved from "https://fallout.fandom.com/wiki/Mistress_of_Mystery?oldid=3431124"
Community content is available under CC-BY-SA unless otherwise noted.