Silently kill any sleeping person.
Bonus XP for each such kill.

At night your silenced weapons do more sneak damage 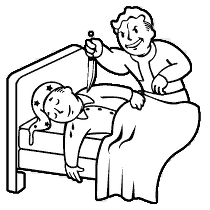 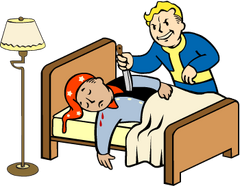 “With the Mister Sandman perk, when you're in Sneak mode, you gain the option to silently kill any human or Ghoul while they're sleeping. And, all Mister Sandman kills earn bonus XP.”— Fallout 3 in-game description

Mister Sandman is a perk in Fallout 3, Fallout: New Vegas, Fallout 4 and Fallout 76.

With the Mister Sandman perk, when a character is sneaking, the option to silently kill any human or ghoul while they're sleeping is available. XP from killing the target is earned. Mister Sandman kills give a flat 50 XP per kill. XP gain is affected by the Well Rested status effect and the Skilled trait.

Mister Sandman is performed in sneak mode and by choosing "pickpocket" on an unfortunate sleeping victim. The game pauses and brings up a menu with the options to "murder" or "pickpocket". Choose the former to activate the perk. When used, a short murder animation follows with the character cautiously looking around and slitting the victim's throat, accompanied by a cartoony jingle.

Possession of a knife or other bladed weapon is not necessary to perform a Mister Sandman kill, even though the kill animation shows the deed performed with a combat knife.

“As an agent of death, you can instantly kill a sleeping person. Your silenced weapons do an additional 15% sneak attack damage.”— Rank 1 description

“Murder in the dark!”

The name of the perk is in reference to The Chordettes 1954 song Mr. Sandman. While the perk has existed since Fallout 3, the song itself did not appear in any released game until Fallout 76.

The only solution appears to be selecting/receiving these perks in the "correct" order.[verified]

Retrieved from "https://fallout.fandom.com/wiki/Mister_Sandman?oldid=3456541"
Community content is available under CC-BY-SA unless otherwise noted.