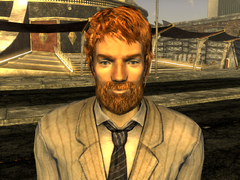 Mister Holdout without his glasses

“There's a guy on the main drag who sells second-hand adventuring gear. He's got an okay selection, but where does it come from?”— Rotface

Mister Holdout is a shady fellow living on the New Vegas Strip in 2281.

Mister Holdout is willing to sell holdout weapons to people looking to get into casinos on the New Vegas Strip. He is standing outside of the Gomorrah casino and will hail the Courier when they first pass him.

During interactions with Mister Holdout, the player can pass a Sneak check of 50 for XP.

Holdout is a term for concealing and hiding cards on one's body. Additionally, a holdout gun is another name used to refer to a pocket-pistol or derringer: handguns of very small size and caliber, making them easy to conceal, and meant to be used in emergencies or situations where conventional weapons are inaccessible.

If you convince him to sell bigger holdout weapons with the Sneak check, his inventory may nevertheless not change. [verified]