Mister Handies are a type of robot found in the Commonwealth, on the Island, and in Nuka-World in 2287.

Like feral ghouls and other robots in the Commonwealth, the limbs of Mister Handies can fall off or otherwise break when they take damage. This is also true for Mister Gutsies. Codsworth and Curie are immune to this mechanic due to their status as companions. Mister Handies can sometimes spawn in a state of disrepair, with one or more of their limbs or chassis panels missing.

Mister Handies have a variety of weapon configurations, typically utilizing buzzsaws and flamethrowers. Like other robots, if all of a Mister Handy's means of attack are disabled, it will initiate its self destruct and charge its enemy.

A base, unmodified version of Mr. Handy.

A unique version of Mr. Handy encountered at Milton General Hospital, with a pincher and saw blade attachment.

The Mister Handy wrecker is a hostile version of the Mister Handy. Usually seen fighting together with Rust Devils this robot can be a dangerous foe if paired with other robots.

A different variant of the Mister Handy wrecker, with 25 more hit points, but less DR.

A close-quarters combat variant of the Mister Handy wrecker, with more than double health and DR.

A close quarters Mister Handy made by the Rust Devils. It is superior to the destroyer variant.

The most powerful variant of Mister Handy created by the Rust Devils.

Mr Frothy is a unique, Nuka-Cola inspired variant of Mister Handy located in Nuka-World. Its torso is specially altered to be cubic and is painted red with the words "Nuka Cola" written on front, in its usual font. At the end of each of its arms is a red fan, which were used in conjunction with pressurized tanks in Mr Frothy's torso to spray guests with Nuka-Cola before the war. The raiders in Nuka-Town USA can sometimes be heard commenting on this. In 2287, the spray deals direct damage in addition to radiation damage to its targets.

Three Mr Frothies can be found in the Star Market, two broken ones at the Galactic Zone's entrance. Also two around the Nuka-World junkyard.

A version of the Mr. Frothy, but with a flamer for one of the arms. Found inside the Starlight Interstellar Theater.

A version of the Mr. Frothy, but with a saw for one of the arms. Four are found inside the Starlight Interstellar Theater.

A version of Mr. Handy used by the Gunners. It is frequently found in Gunners bases and outposts. Alongside poison and radiation resistance, the gunner Mr. Handy also has 25 points of frost and fire resistance.

A white painted Mister Handy found in the Galactic Zone.

Mister Handies appear in Fallout 4 and its add-ons Automatron, Far Harbor and Nuka-World.

Box warnings close up in the House of Tomorrow 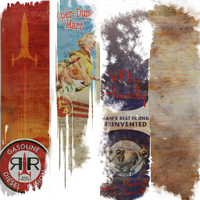 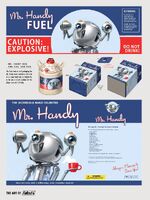 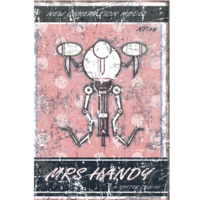