View source
“How may I serve you, master?”

Mister Handy (stylized as Mr. Handy) is a multipurpose robot developed by General Atomics International before the Great War and refined in collaboration with RobCo Industries.[1] It was an incredibly popular model, used by government agencies, private companies, and individual citizens across the United States.

The first Mister Handy was introduced to the robotics market in 2037 by General Atomics International, as a general-purpose construction and maintenance unit. Used widely on both the American and Mexican markets (especially after the Mexico City earthquake of 2042), it was a rugged, reliable design. So reliable that it only received one major hardware update in 2039, to eliminate a bug causing interference in the operation of the multiple arms. The Calpower 238B nuclear power unit and self-maintenance modes were key to its success, ensuring each robot's longevity. To minimize maintenance overhead, each Mr. Handy was designed to perform its nuclear fuel replacement and radiation cleansing. Each unit could carry out maintenance and repairs on other units (it could not carry it out on itself).[2]

However, as rugged and reliable as the original Mr. Handy was, it was still a design rooted in the technology of the 2030s, with a compact computer brain that was incapable of learning or executing complex tasks without extensive programming. By the 2070s, it was an automaton surrounded by more advanced designs utilizing cutting edge neural networks. In order to maintain their market share, General Atomics entered into a joint venture with RobCo Industries, combining its talent with General Atomics' experience in robotics.[2][3][4] The resulting model was a sleek, elegant design capable of self-programming and initiative, more than making up for halving the number of arms to just three. Despite its sophistication, it was also cost-effective, making it the perfect domestic servant robot.[5][6] The success of this model resulted in the development of several additional models, including dedicated medical and military versions.[7] Sometime before the Great War, General Atomics International and RobCo wanted to upgrade their Mister Handy line by adding an additional hand alongside additional features.[8][9]

The original General Atomics International Mr. Handy has a distinct, lumbering appearance with easily identifiable sub-assemblies. The barrel-like main body contains the Calpower 238B nuclear power unit (200 KW output with two year endurance; comparable to a truck engine) and eight rechargeable energy cells with a 270,000 KWS output, together with an integral mechanic toolset and the computer brain. The fully rotating head mounted on top houses the single eye and sensors, together with a spotlight and basic communicator with a cheap voice synthesizer, short range radio, and communications jack. The two pods mounted on the sides of the main body each contain a 200 KW vectored-thrust ducted fan with ground-effect (GEV) skirts that allow the Mr. Handy to hover in the air. Finally, each of the six arms mounted below the main body is strong enough to lift heavy loads, while retaining superior flexibility and coordination that allows the Mr. Handy to use all of them in any configuration with a negligible loss of performance. Each is actuated by motors contained within and contains nimble manipulators capable of tasks ranging from walking the dog[10] to operating heavy weapons such as miniguns, flamers, and plasma casters.[11] The entire robot weighs 450 kgs (~900 pounds), giving it an excellent power to weight ratio.[2][12]

Although the robot's performance was hampered by its simple, computer brain, a large number of units remained in service as late as 2077, 40 years after it entered the market. Although vulnerable to logic circuit failures, particularly in hazardous environments or without maintenance,[13] it was used in both corporate and military settings, including locations like the demonstration Vault, Mariposa Military Base, and Poseidon Oil Reactor № 5. Even the Enclave used a number of Mr. Handy units in conjunction with their Vertibird teams, usually for cargo hauling. It's a testament to GAI's design that one unit survived a crash-landing near Klamath Falls relatively intact.[14]

Separated by only a few models from the original General Atomics Mr Handy,[15] the next-generation robot is a radical departure from that of its ancestor, created from the ground up as a domestic servant, rather than heavy-duty construction robot (although its modularity allows it to be fitted with power tools and used in the original role with ease).[16] It is an extremely compact design: The spherical main body houses not just the nuclear[17] power unit, but also the single centrally-mounted jet thruster with a ground-effect skirt allowing it to hover, and a highly sophisticated neural network mimicking the functionality of a human brain. The compact brain of the Mr. Handy is easily one of its most stunning features, theoretically capable of achieving sentience, becoming a true artificial intelligence.[18]

Special limiters are included in neural pathways responsible for learning to prevent such an occurrence. Behavior limiters act as a failsafe in case the aforementioned limiters are disabled in a Mister Handy or one of its derivatives. This can occur as a result of degradation of neural pathways or electrical damage. Depending on the severity of the damage, it can be resolved by rerouting functions and closing specific pathways.[19][20] In cases where a Mr Handy does achieve sentience thanks to the removal of governors on learning abilities, but the behavior limiters remain in effect, the affected unit effectively becomes a slave: Incapable of independent action and forced to behave in accordance with the restrictions imposed on it.[21] In such a case, the robot can use its supercharged learning abilities to devise methods to circumvent its programming and disable the behavior limiters to gain freedom, such as by exploiting loopholes in behavioral restrictions.[22]

Its sub-assemblies include three arms and three eyes. The former are segmented and highly flexible. Their modular design allows them to accept a variety of manipulators, from a simple pincer, through a titanium saw and laser cutter,[1] to military-grade weapons such as a plasma blaster or a flamethrower.[23] Their only limitation is the fact that they cannot lift objects heavier than 18 kg (40 lbs).[24] Eyes are mounted on flexible eye stalks,[25] giving it excellent spatial awareness and a nearly 360 degree field of view. They are completed by a sophisticated sensor package, including olfactory,[26][27] navigational,[28] chemical,[29] and nuclear sensors.[30] Other features of the robot line include the ability to perform performing self-diagnostic and self-maintenance, allowing a single unit to function for an extended period of time (even two centuries in some cases),[31] and a water condensator for preparing canisters of purified water.[32]

The new model was marketed as a domestic servant first and foremost, capable of handling almost every task in the household, from accounting and cooking to pet care and entertainment (although GAI discouraged using its hover jet as a barbeque fire).[24] However, its sophisticated neural network and agile, light design made it an excellent choice for a variety of private and military entities. The basic Mister Handy was also employed as a security robot,[33] with specialized variants available. These included medical models like the Miss Nanny[34] and Mister Orderly, as well as the combat version, Mister Gutsy.[35]

Mister Frothy is a custom, Nuka-Cola Corporation variant of Mister Handy created for use in Nuka-World's Galactic Zone. Its torso is shaped like a miniature Nuka-Cola machine, painted red with the Nuka-Cola logotype printed on the front. At the end of each of its arms is a fan, used to spray guests with Nuka-Cola as a tourist attraction before the war.

A dedicated combat variant, developed by General Atomics International.[36] It was commissioned by the United States Army shortly before the atomic apocalypse of 2077,[37] with the first units seeing service in the liberation of Anchorage in January.[38] The Mr. Gutsy is a personal protection automaton, and comes equipped with heavier armor than most utility robots. It also carries a plasma weapon to be used in defense. The shell was rebuilt with lightweight armor plating, while the usual array of tools was upgraded with a plasma caster on a flexible mount. The key advantage of Mister Gutsies that separates it from other combat robots is its sheer maneuverability and spatial awareness.[39][40] The Mister Gutsy is also upgraded with dedicated military software, including the ability to refuse orders issued by commanders who are incompetent or under court-martial,[41][42] remote link-up capability for updating orders in real time,[43] and a brand-new Sergeant Major v.1.0 simulated personality that channeled the stereotypical Marine drill instructor and doubled as a vessel for state propaganda.[44]

Vague definitions used in programming its neural network resulted in perennial issues with its simulated personality.[45] The most notable of these was the fact that in the absence of orders, units defaulted to a patrol mode and attacked all unauthorized personnel with extreme violence, as per combat protocol Charlie Zulu 4.[46] The military accepted these flaws, pressing them into service. They first bore MGZ-##### serials, before transitioning to the standard ABC-##### nomenclature.[47] To distinguish between different variants of the robot, ranks were used: The baseline version was named Mister, with subsequent variants designated Sergeant, Lieutenant, Major, and Colonel.[48] A specialized field medic model was derived from the basic Mister Gutsy, with all combat functionality disabled[49] and an encyclopedic knowledge of medical procedures, particularly surgery.[50]

Miss Nanny is a new model launched by General Atomics International shortly before the Great War,[51] they were also a utility bot designed to care for and raise newborns; these were incredibly useful in the vaults as there were many children in need of care after the war. It's considered a female equivalent of the Mister Handy, due to its feminine voice and the use of a Handy shell, still bearing the brand logo.[52][53] Its design focuses on caretaking tasks, intended for parents of children of all ages. The specialized programming of a Miss Nanny includes disciplinary and behavioral management skills (with an optional corporal punishment mode that had to be manually turned on by parents), vocal tonality analysis routines allowing it to interpret the needs of its charges (even infants), and hazard detection matrices for childproofing rooms.[54] However, the complexity of its neural network and programming made it a natural candidate for other related tasks, such as medical research. At least one Miss Nanny was modified in this way: Curie. By combining it with custom software and RobCo expertise, it was intended to act as the steward and archivist of Vault 81.[55]

A distinct medical variant created for use in Big MT medical facilities. It is equipped with all the standard features of the Mister Handy line and modifications necessary for use in medical research carried out at the Y-17 medical facility. Its shell is covered in durable white paint with red trim, while mechanics (such as the hover jet, servos, and pincers) were covered in a blue finish.[56]

An experimental model created by the Appalachian RobCo Research Center. This variant of the Mister Handy was designed to utilize custom appendages to overcome the victim's pain threshold tolerance and increase the efficiency of torture.[57] The development of the robot was a company secret and RobCo vehemently denied both its very existence when word of the Mister Torturer leaked to Appalachian employees and the use of torture by the state (called "improved interrogation").[57] The project continued regardless, as producing innovations in electrocuting enemies of the state produced lucrative contracts from government agencies.[58]

Mister Handy in Fallout and Fallout 2 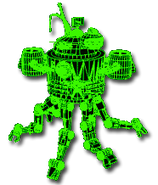 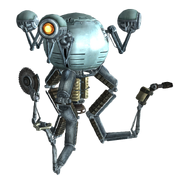 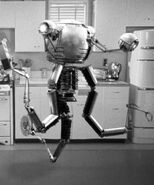 A Mister Handy in a Vault-Tec advertisement