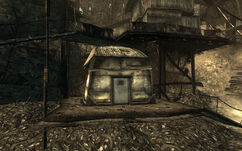 Mister Burke's house is a small shack in Megaton owned by Mister Burke. It is located immediately adjacent to the bomb in the center of town. It is locked with a very hard lock.

Mister Burke's house is located on Megaton's lowest level, directly east of the Megaton atomic bomb and beneath Lucy West's house. Inside there is a pile of metal boxes with random loot between an armchair and a rusted dinner table by the north wall; by the south wall lies a derelict empty locker, rusted metal shelves, and an office corner desk. At the east end is a small bedroom.

Mr Burke's House.jpg
Add an image to this gallery
Retrieved from "https://fallout.fandom.com/wiki/Mister_Burke%27s_house?oldid=2342238"
Community content is available under CC-BY-SA unless otherwise noted.