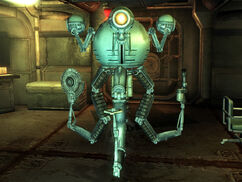 “Welcome to the Weatherly. Mister Buckingham at your service.”

Mister Buckingham is a Mister Handy robot in Rivet City in 2277.

Mister Buckingham appears only in Fallout 3.

Mister Buckingham and Private Jones have a tendency to randomly turn hostile towards the player unprovoked, even when the rest of Rivet City is peaceful. The other citizens will also turn hostile during the fight, even if the player doesn't fight back when being attacked. [verified]

Retrieved from "https://fallout.fandom.com/wiki/Mister_Buckingham?oldid=3188811"
Community content is available under CC-BY-SA unless otherwise noted.