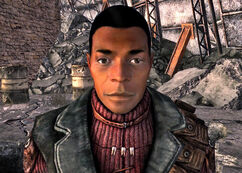 “Fair enough. All right, last question - What animal is on the NCR's flag - a two-headed bear, an eagle, a two-headed snake, or a two-tailed lion?”

Missionary is the name given to at least two characters living in Freeside in 2281.

They are being employed by the NCR force as a mean to find more NCR citizens in the area, so they can provide them with food and water. Each missionary is located in the squatter camps the player character is originally sent to investigate at quest markers.

Either will ask the player character if they are a citizen of the NCR. If the Courier answers "yes", the Courier is quizzed with three questions to prove that they are an NCR citizen.

This will give access to Missionary's note, which reads cryptically "Hope is the key." Hope is actually the password the Courier gives to the two NCR guards outside the ruined store they use to supply the NCR Freeside members with food and water. This note can also be obtained by killing the missionaries.

Retrieved from "https://fallout.fandom.com/wiki/Missionary?oldid=3107620"
Community content is available under CC-BY-SA unless otherwise noted.