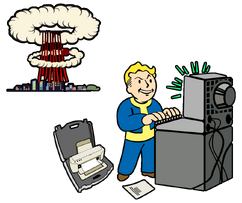 “Secure {MSiloLocation} and prep for launch.”

Before starting this quest, the player character will need to acquire at least one nuclear keycard and the decrypted weekly launch code for a silo bunker.

Upon entering a silo bunker (either Site Alpha, Site Bravo, or Site Charlie), be prepared for many robot enemies. Bring energy-resistant gear and energy weapons. A highly radioactive room will also be within the silo.

Once the quest is completed, the player character will be prompted to select a blast zone target location within Appalachia for the nuclear missile. Some lower-level areas located in the western portion of Appalachia are considered to be within a "protected zone" and cannot be targeted. If fissure site Prime is targeted, the scorchbeast queen will be spawned and the Scorched Earth quest will begin. Targeting other locations will spawn higher level versions of whatever enemy is normally present in that area. 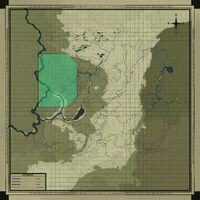 The target selection, and the red area that represents the blast radius
Add an image to this gallery
Retrieved from "https://fallout.fandom.com/wiki/Mission:_Countdown?oldid=3096948"
Community content is available under CC-BY-SA unless otherwise noted.