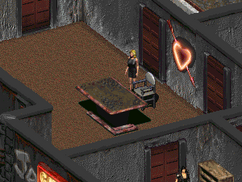 “Whatever your pleasure or fantasy, we can provide it... and don't be shy, we've heard it all.”

Miss Kitty is the owner and proprietor of the Cat's Paw brothel, New Reno's premier house of negotiable affection. Despite the close proximity of the Desperado casino, home base of the Mordino crime family, Miss Kitty and the Cat's Paw remain independent.

Kitty is a beautiful woman with a professional bearing.[1] She aims to keep Cat's Paw at the top of what New Reno has to offer and to this end maintains a strict work ethic for her girls — no Jet, monthly physicals and special training to suppress their physical revulsion. She is also a very caring and compassionate person, even to mentally undeveloped people.

She recognizes that people come to an establishment like hers to have fantasies filled—or, at the very least, needs met—Miss Kitty has heard it all and provides services for most of it. She keeps close reins on her business, and makes sure that her establishment can rise to any challenge that may come to the door.

In addition to the building staff, Miss Kitty also employs a hawker who stands on the curb outside and advertises the Cat's Paw services in a highly colorful manner to all passers-by.

While the Cat's Paw remains an independent entity under Miss Kitty's guidance, she nevertheless has steady contracts with two of the Reno crime families. Overheard comments from her suggest that in addition to satiating the nearly endless appetites of the Mordino family's golden boy, Myron, the Cat's Paw also provides guests for John Bishop's penthouse parties at the Shark Club.

Very few in the wasteland know the history of the Cat's Paw. Naturally, one of those few is the owner. Miss Kitty is well aware that her brothel once was a photo studio, and is keen on collecting copies of the magazine produced there.

Certain dialogue choices can maneuver Miss Kitty into a conditional acceptance of a date with the Chosen One. However, this date has no impact on any element of the game and cannot, in fact, occur before the main plot has been completed. Miss Kitty will freely date the Chosen One, however, if they choose to continue playing after completing the game.

Miss Kitty appears only in Fallout 2 and is mentioned in the Fallout Bible.

Retrieved from "https://fallout.fandom.com/wiki/Miss_Kitty?oldid=3106521"
Community content is available under CC-BY-SA unless otherwise noted.