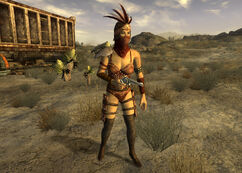 “Miss Fortune is a character that randomly appear in V.A.T.S. to help you out when you have the Miss Fortune perk. Just when your enemies think they have the upper hand, Miss Fortune appears to turn their world upside down.”— In game - description

Like the Mysterious Stranger, Miss Fortune will literally appear out of nowhere during V.A.T.S. to assist the Courier. However, rather than killing the enemies, Miss Fortune's attack causes little direct damage, but instead knocks them unconscious ("Fatigues" them). Her attacks hit an area and has random mishaps on people. They also have a high chance of damaging or outright breaking an enemy's weapons; this effect does apply to grenades and similar weapons and will cause them to detonate, typically killing the non-player character. After the V.A.T.S. sequences finish she will disappear as abruptly as she appeared.

Retrieved from "https://fallout.fandom.com/wiki/Miss_Fortune_(character)?oldid=2331882"
Community content is available under CC-BY-SA unless otherwise noted.