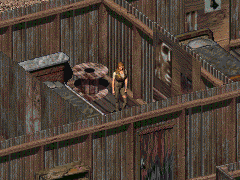 “How dare you call me a slut! Let me tell you, I am very picky about the people I sleep with. Why, I have only slept with 10 or 20 people this month!”

Miria is the daughter of the slaughterhouse owner Grisham, in Modoc.

Miria, a very shapely and seductive-looking woman, is the daughter of Grisham, slaughterhouse operator in Modoc. She may be married to gain a permanent companion and earn a reputation title. Miria's brother Davin can also be wed to the same effect, with slightly different stats.

Miria appears only in Fallout 2 and is mentioned in the Fallout Bible.

Miria and a male Chosen One wed
Add a photo to this gallery
Retrieved from "https://fallout.fandom.com/wiki/Miria?oldid=3345841"
Community content is available under CC-BY-SA unless otherwise noted.