Mirelurk research is a paper note in Fallout 76.

The note can be found in on the northeastern bank of Highland Marsh, beside a corpse and a duffle bag and near several clutches of mirelurk eggs.

The Mirelurk appears to be a fearsome and formidable creature. They are generally social with other Mirelurks however they tend be aggressive to other creatures and one another if one gets too close to another.

Their eye sight appears to be poor but they have a extraordinary sense of smell. One would be advised to always stand down wind from them. After leaving the camp for a short while I returned to find that it had been completely ravaged by the Mirelurks and all my rations had been devoured.

Their large set of claws appear to be used primarily for hunting. Once their prey has been captured the smaller set of claws on their abdomen is used to strip their prey down to the bone in a matter of minutes.

The large hardened carapace on their back appears to be their primary defense mechanism. However it is to be noted that most of the medium to large fauna in the area tend to ignore the them.

They also grow remarkably fast, it only appears to take them a few weeks for them to reach maturity. This furthers my theory that if these creatures could be domesticated we could have a near limitless supply of food for the Free States.

Tomorrow when the nest is unguarded I'll attempt to acquire a few eggs and return to base with them for further study. 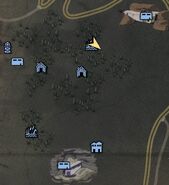 Location on the map
Русский
Community content is available under CC-BY-SA unless otherwise noted.
Advertisement