The mirelurk nesting hole only appears in Fallout 3. 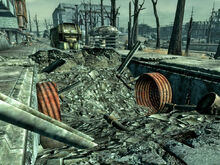