This is a cave complex reached through a sewer grate south of the reflecting pool in The Mall. In many places, there are radioactive streams of water leaking down. Originally home to a small number of humans who hid here seeking refuge, they apparently perished from the radiation or the giant ants and mirelurks that chose to make it their nesting place.

Past the entrance, the path forks. Both tracks will converge thereafter, the right path eventually dropping into the left path from above. Following the path will lead to a circular chamber used by the mirelurks as a nesting site which is protected by at least one mirelurk of a higher level than the rest (a mirelurk hunter, king, or both). 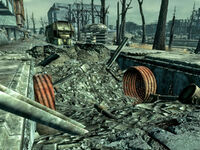